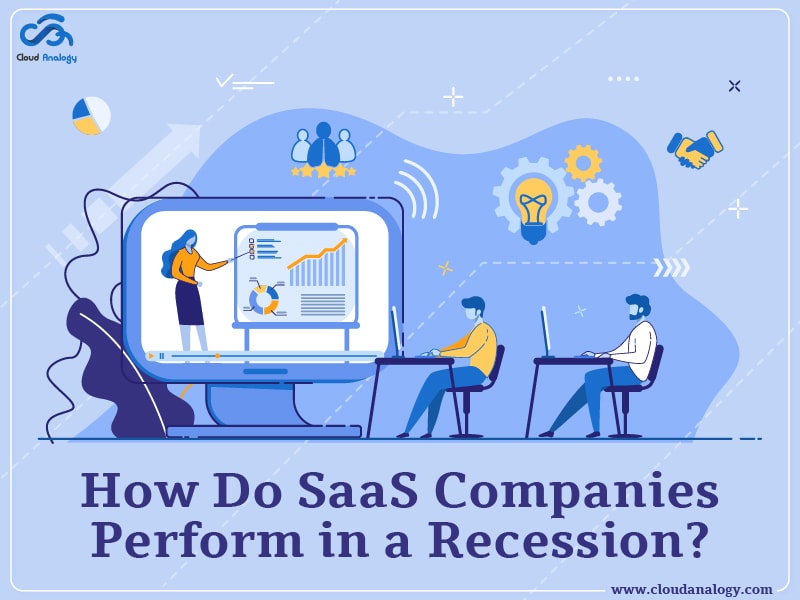 There is no denying the fact that the novel coronavirus (COVID-19) has turned out to be a pandemic and a global recession is very much on the cards. It is likely to impact every sector and niche of the industry, including the software as a service (SaaS) segment.

In order to gain a clear understanding of how software-as-a-service companies may perform during the likely recession period ahead of us, it is important to evaluate their performance through the previous recession.

Prior to the start of the Great Recession, there were 17 public software-as-a-service companies. Omniture, one of those companies, was acquired in 2009 by Adobe and the remaining 16 remained independent and in business through the downturn and into the recovery.

The Cloud Analogy team evaluated quarterly revenue and operating expense data on those companies for the period from the year 2006 to 2011. Performance trends were provided for this time period for a few years before the mid-2008 crash, through the recession, and then a few years into the recession.

If we look at the image below, the first thing we will probably notice is how much of an outlier Salesforce was. This chart demonstrates the quarterly revenue for the other 15 public SaaS companies from 2006 through 2011. (Note: The Great Recession was shaded gray in the chart for context.) 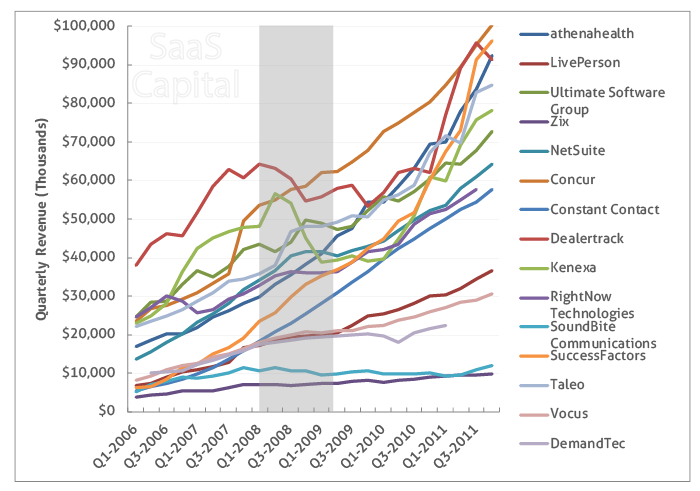 The image below demonstrates the operating income or loss, excluding large non-cash goodwill expenses, for the same period and companies. 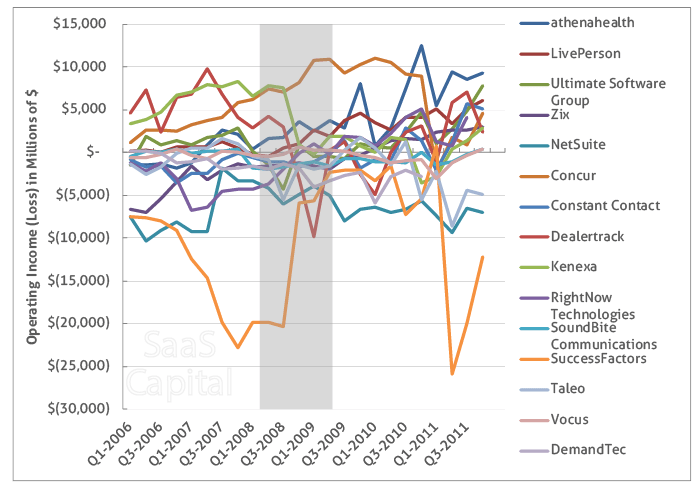 Let us now have a close look at the aggregated average annual growth rate and average quarterly income or loss as a percent of revenue for the 16 companies. 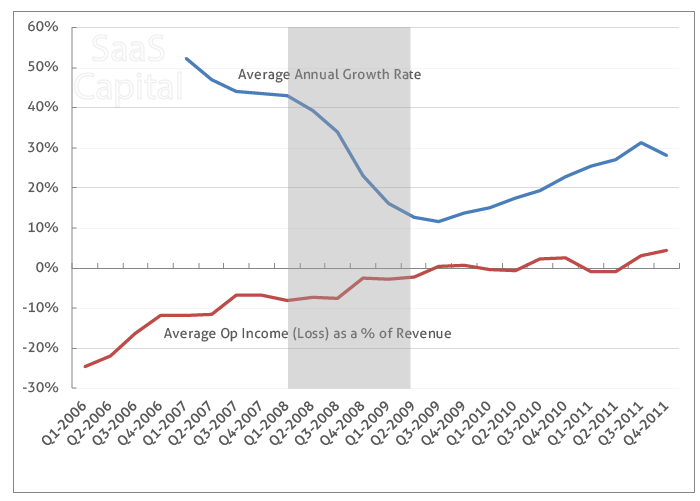 Looking at the above data and charts, we have some takeaways:

Overall: The software as a service model is resilient to economic downturns. It is interesting to note here that not even a single of the 17 companies became insolvent or declared bankruptcy. In fact, over 80 percent of the SaaS companies continued to grow and prosper through the recession and managed to attain profitability in fairly short order.

Growth: Growth rate decline was substantial, from 40 percent on average just before the recession, to 10 percent by the time it ended. It is interesting to note here that the decline followed the natural growth curve of a maturing software as a service business. However, the recession essentially brought a kink in the growth curve that then went on to rebound to a more normal level of 30 percent, a few years after the recession ended.

Profits: On the bottom line, the impact of the recession is less clear. Generally, these SaaS companies were trending toward breakdown before the recession and then continued on that path during the recession. A majority of these businesses had relatively recently completed their initial public offerings (IPOs) and had robust cash positions and could have afforded to grow their way into profitability as opposed to employee layoffs.

Cyclicality: Of the three public software as a service company that in fact shrank in the recession, one sold exclusively to auto dealers, one was an advertising platform, and one was a recruiting application.

Therefore, it is very much clear that the SaaS business model will not completely insulate companies that have a cyclical product or who sell into highly cyclical industries.

Cyclical sensitivity is a double-edged sword. However, the three companies that initially shrank during the recession were able to grow faster than the rest of the 13 companies. They were already profitable before the economic downturn. Their growth rates further recovered faster and to a larger extent.

A recession will substantially slow down the growth of an “average” software as a service company. However, well-performing companies like Salesforce can excel irrespective of the economic culture. All in all, the SaaS business model is resilient, but not bulletproof. 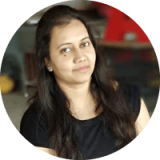 "Deepali, a certified Salesforce Advanced Administrator and Salesforce Developer and CSPO Certified at Cloud Analogy, is a successful name in the industry circles when it comes to the delivery of successful projects with end-to-end testing. Deepali is a globally-renowned industry stalwart when it comes to managing Operations & Delivery Planning in driving Business Performance Management.

How To Enable Dynamic Forms In Salesforce